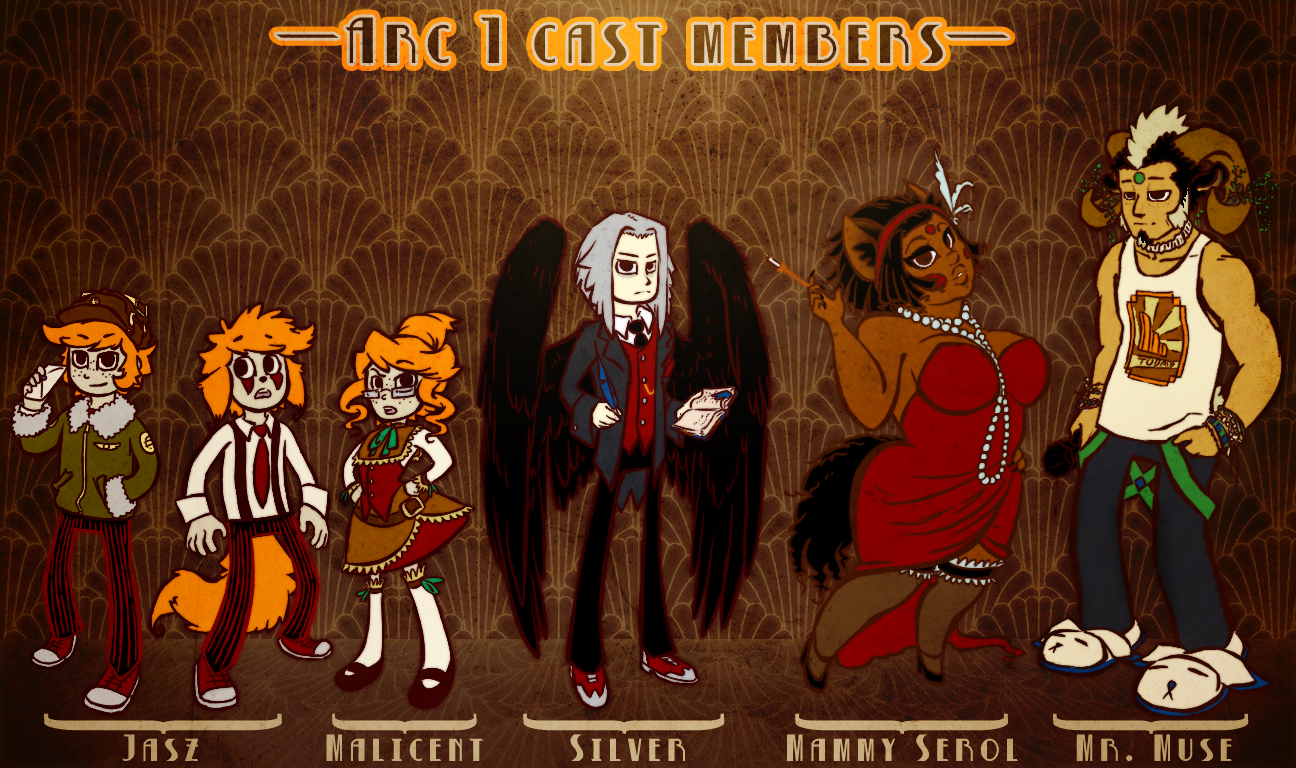 Claus “Jäsz” Joplin has been spirited away to the dreamworld of Phantasmagoria, with the help of you and other readers he and his colleagues can explore this strange world by interacting with the bizarre Dream Logic that governs it, and uncover the mysteries within.

This game begins a quarter of the way through the first chapter of End of Infinity, so if you wish to have context it’s recommended to read the comic up to page 68 before playing. 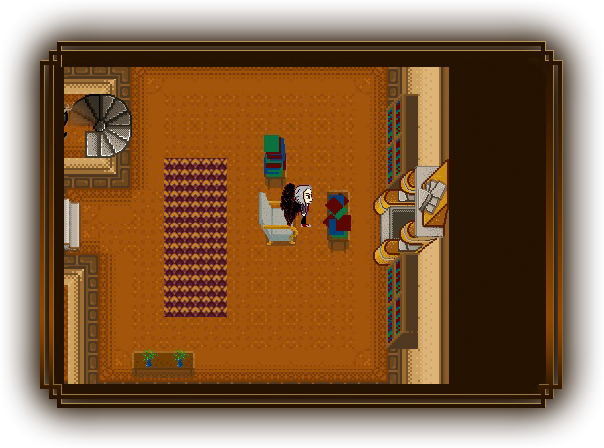 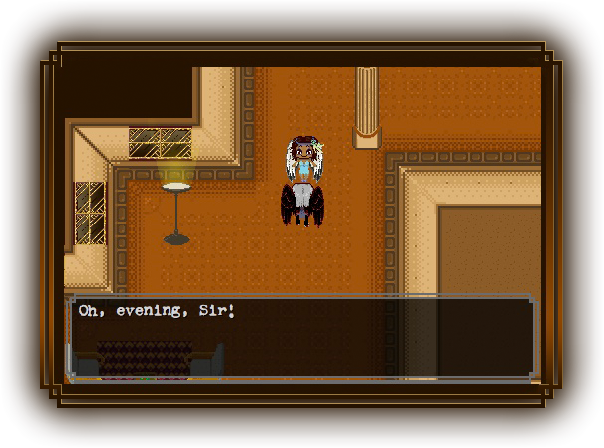 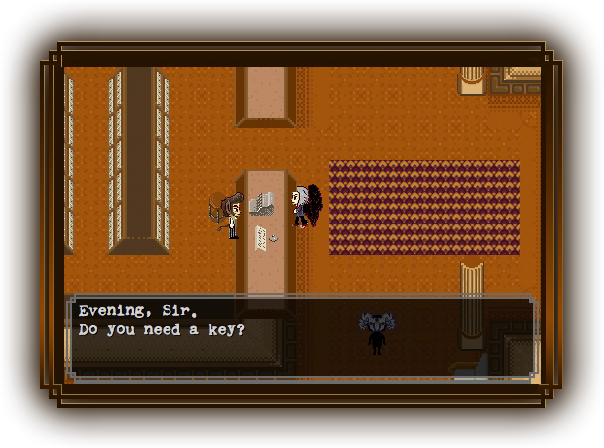 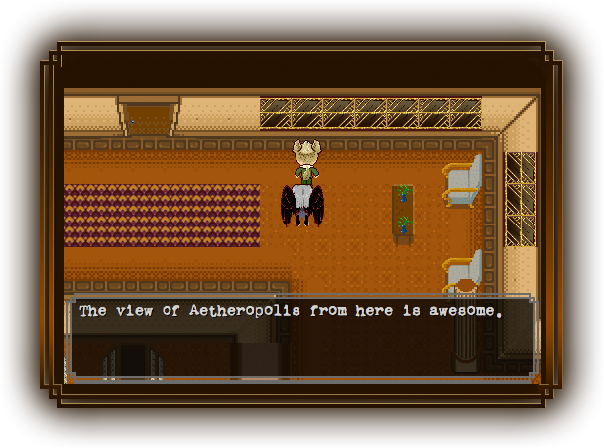 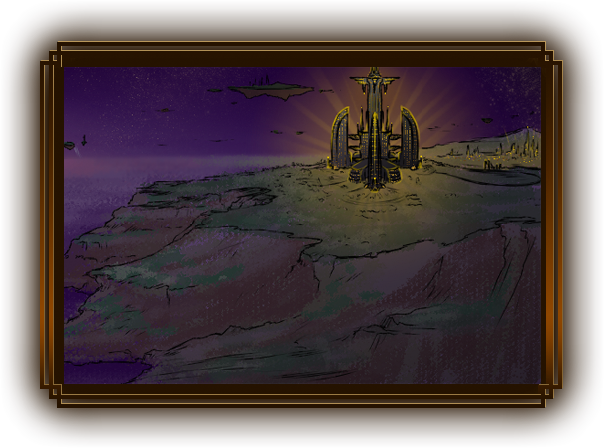 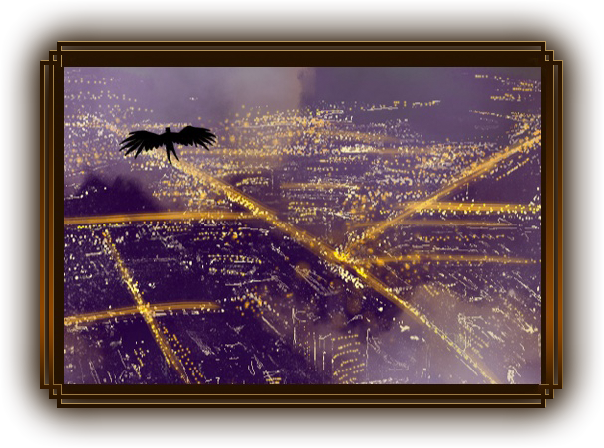 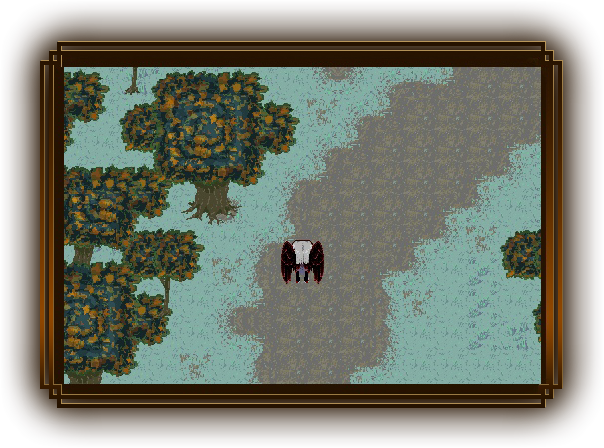 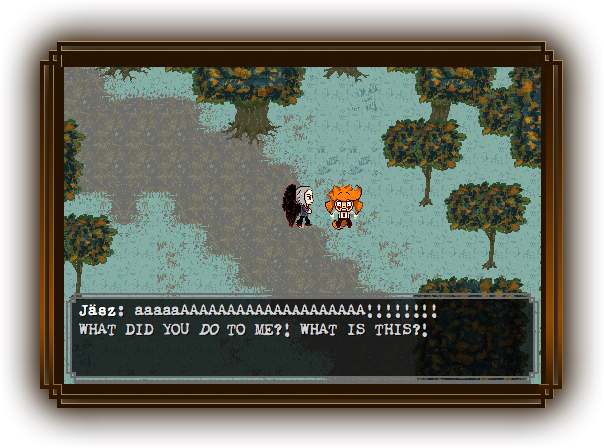 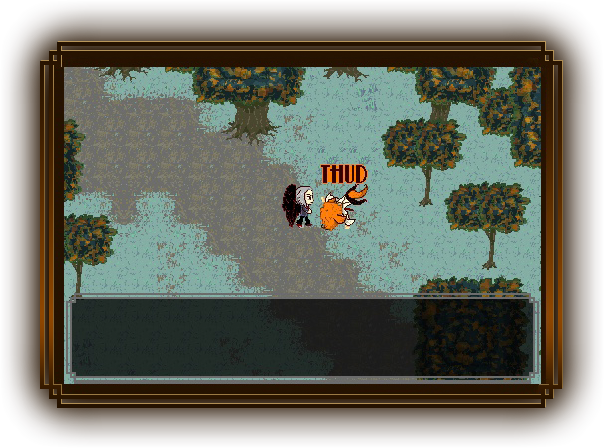 I originally created the fictional world of End of Infinity as an ecosystem for readers to creatively express themselves and to eventually contribute more directly to the project. It was my hope that eventually I could inspire enough people to contribute that this would make the project sustain itself, but over the few years it was active it never garnered enough traction to get the snowball rolling. I hoped to create something that would serve a small yet eager group, then become public domain and live on through future updates made by said group. To date the comic has received 205 pages (202 of which have been published) with nearly 1,000 animated panels, in addition to the game. 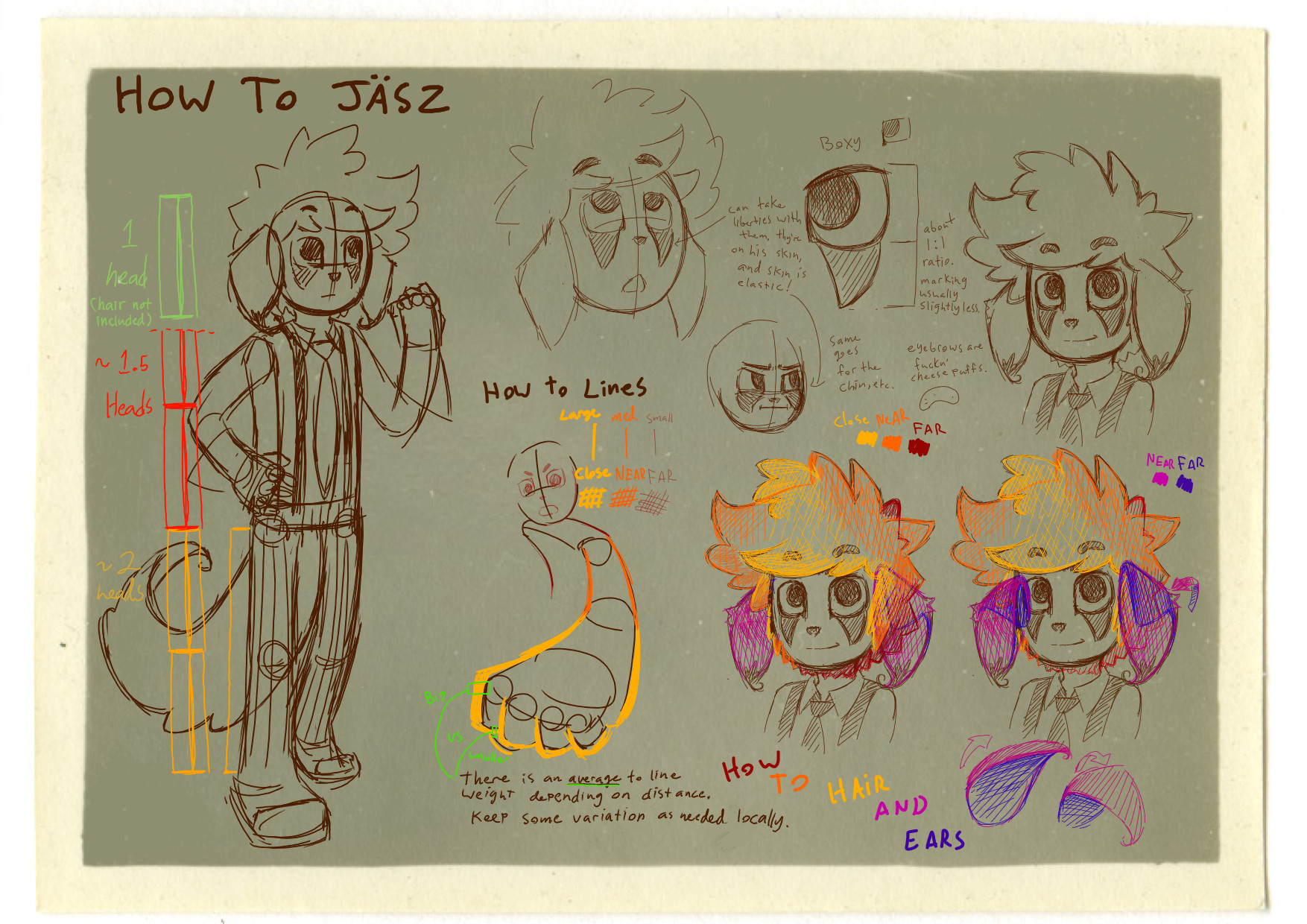 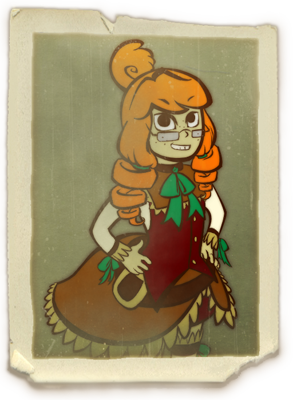 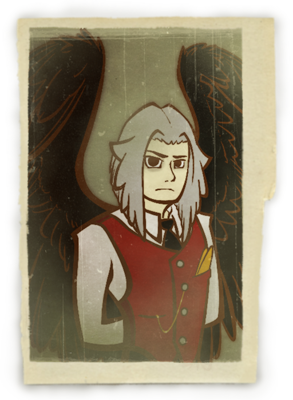 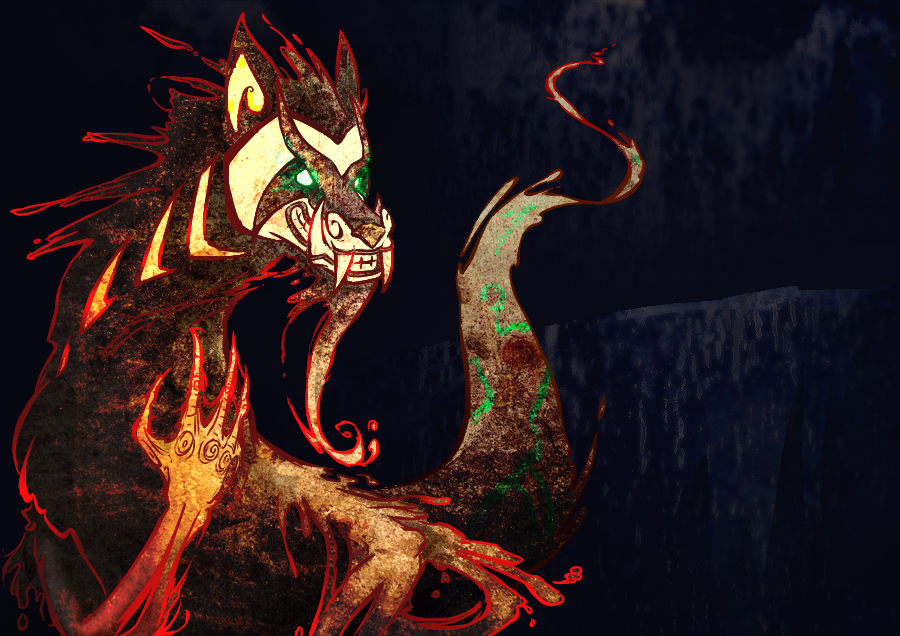 The EOI world functions based on multiple levels of consciousness, each with their own rules which govern them. 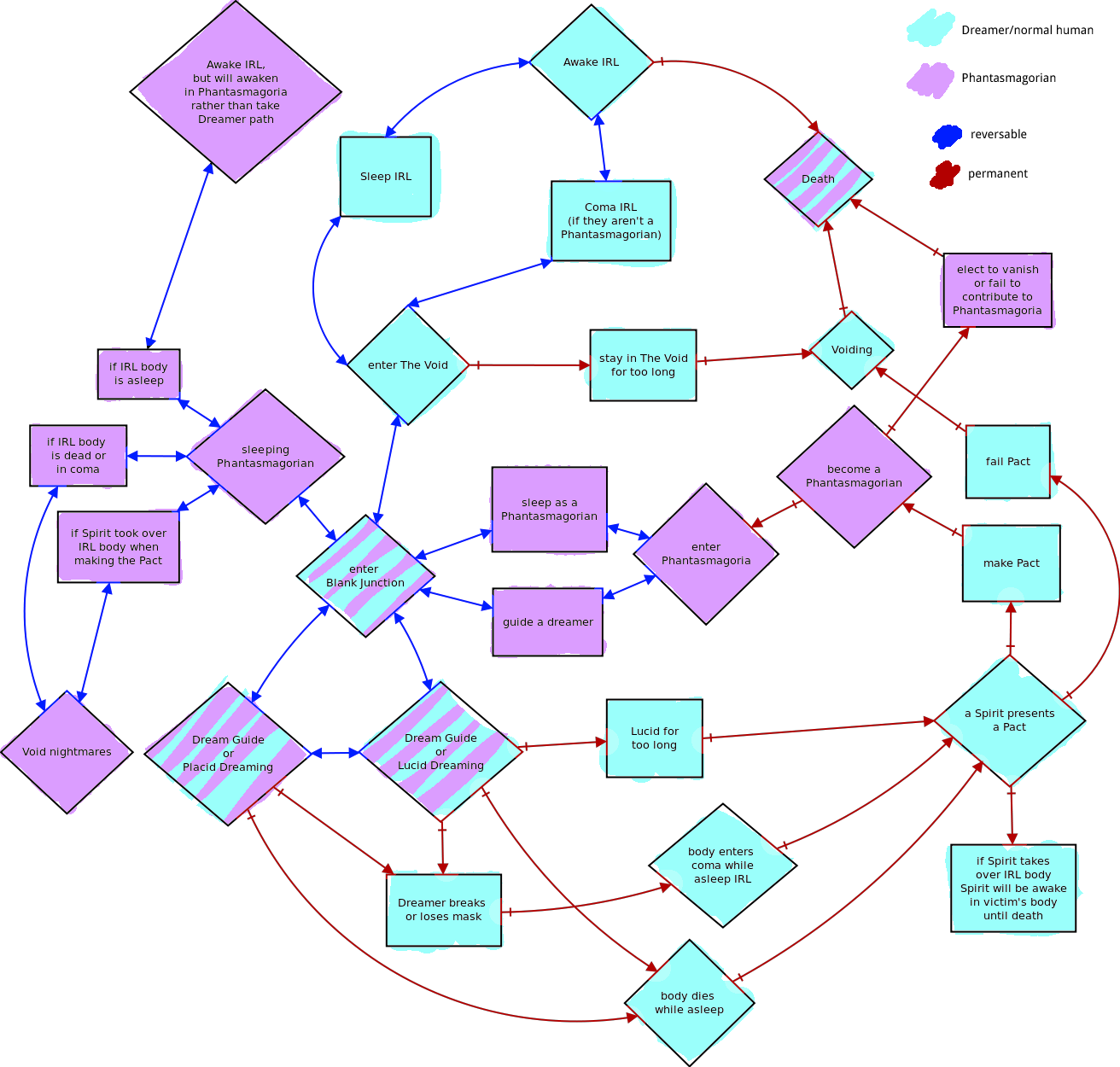 EOI was heavily inspired by the MS Paint Adventures series of multi-media interactive comics authored by Andrew Hussie, and I discussed the idea of branching the medium out with Andrew and crew when coining the term multi-media interactive comic, or MMIC. The format works much like early Text-Based RPG’s, MUDs, and so forth, where the reader enters “commands” via a messaging inbox of some kind, which then serves as inspiration for the author, which acts as the game’s interpreter and content generator (author I/O).

All feedback of this kind is woven into the various updates as they’re received. Turnaround is intended to be expedient, so each post (usually occurring daily) may consist of narrative text, character dialogue, images, animations, minigames, and voting forms for determining the characteristics of incoming new characters. 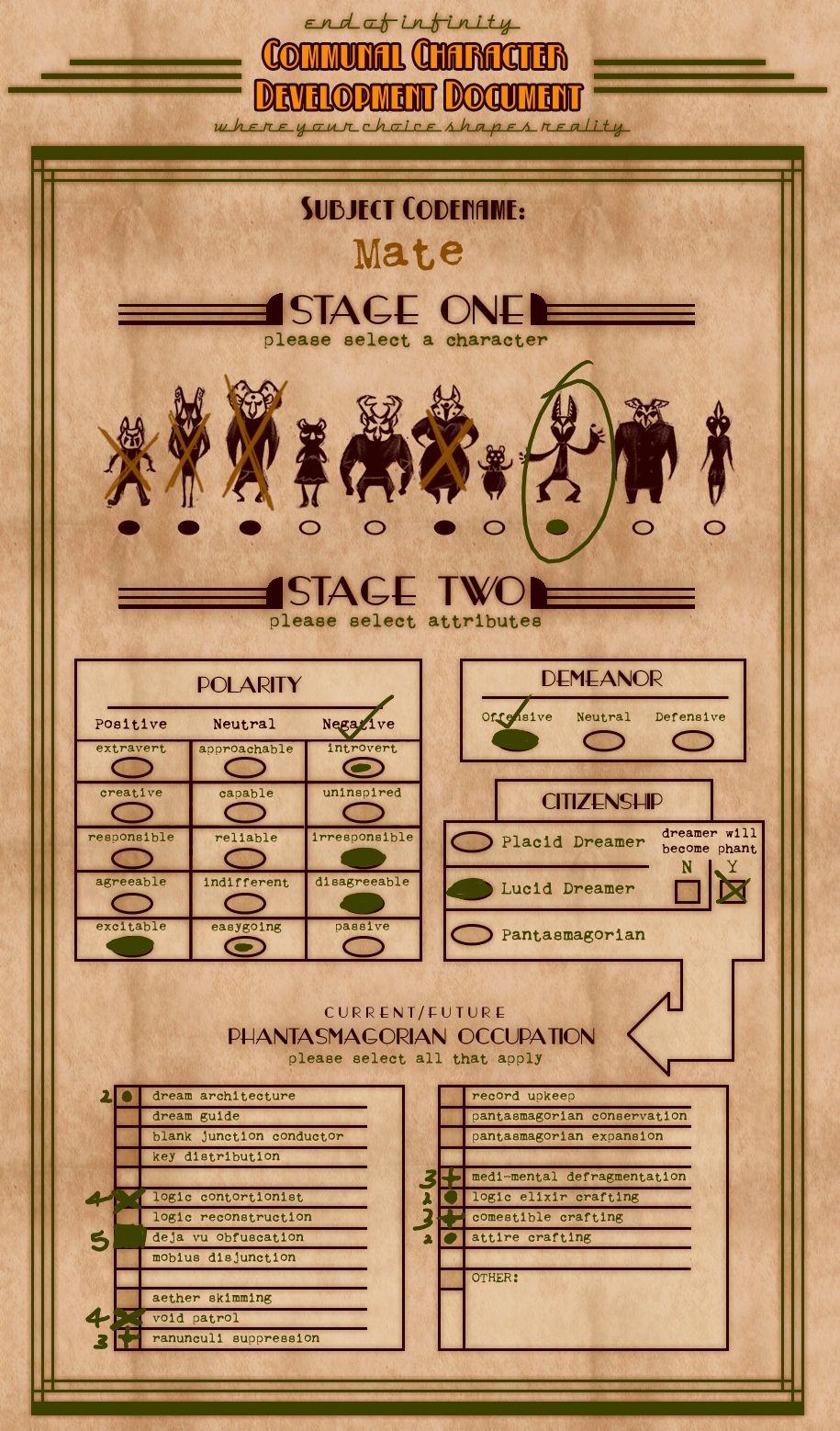 The website itself uses a bespoke CMS called MUSE which was developed by Jose Romero and I. It works a lot like Dropbox (in that you would simply drop files in a designated folder of your PC and they’d be copied to a server via RSYNC). To ease the creation of new “pages”, the system has a custom markup language (similar to Markdown). The language would automatically place the panel images and animations when referenced by number in a “script” (plain text file). Dialogue, narration, etc were all handled in a similar way. 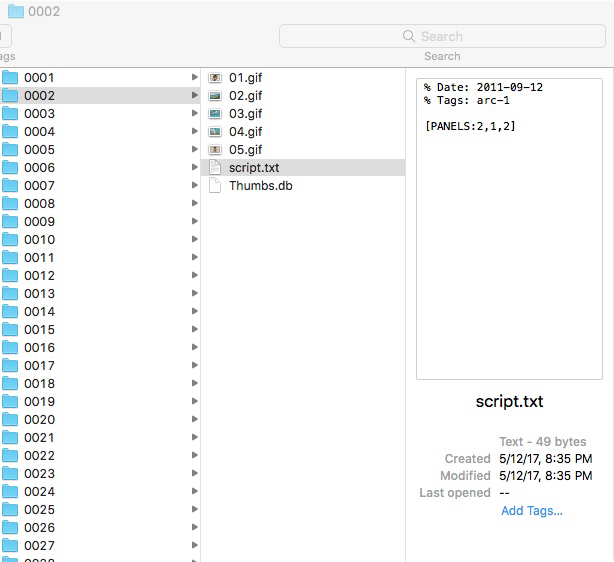 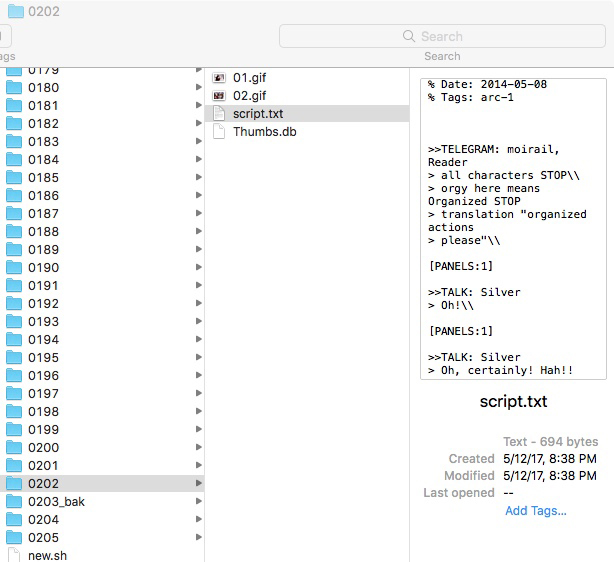 When readers submit commands, known as Telegrams in EOI nomenclature, it sends an email of the content directly to my inbox for review and process. This form was also set up to replace user-entered punctuation with the corresponding telegram standards in an effort to further enhance immersion. You can try it live here, but please refrain from submitting telegrams, as I do still get them on occasion and am cataloging any which aren’t spam. 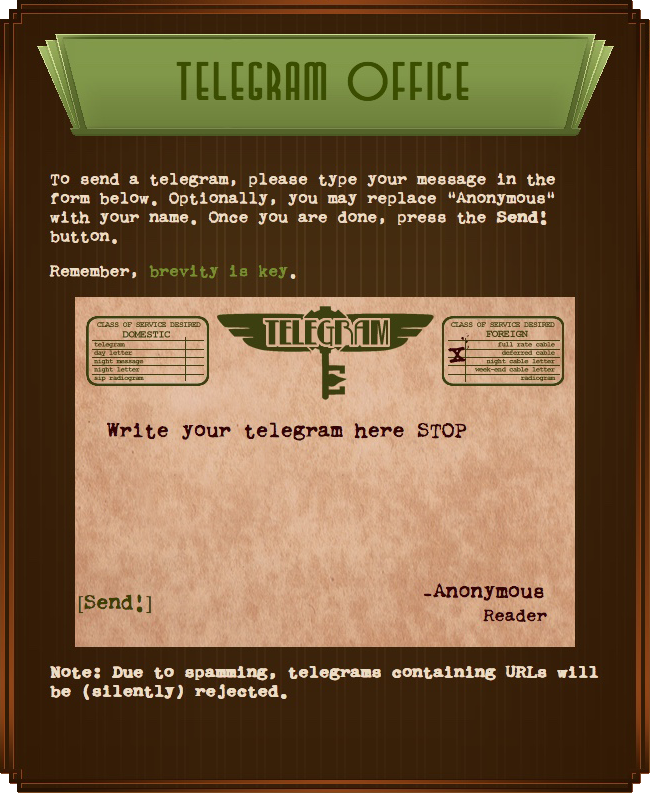 As for the game, the plan was to scatter games throughout the story at various pivotal points where exploration in the first-person sense would help convey the impact of what had transpired in the series lore, however only one game segment has been produced to date with any other components being simple easter eggs and one-offs. The one game which has been published was constructed from scratch in JavaScript by Jose, then populated with content I would make and insert with a tool called Tiled. The engine was written in a way that allowed for not only tile layers but instances of characters and even dialog trees and cut scene triggers to be edited directly on Tiled.

Here’s a collection of the character and NPC assets I’ve made for the game specifically, these are actual-size: 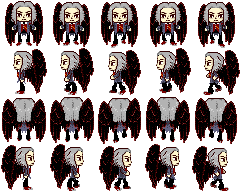 and the overworld assets: 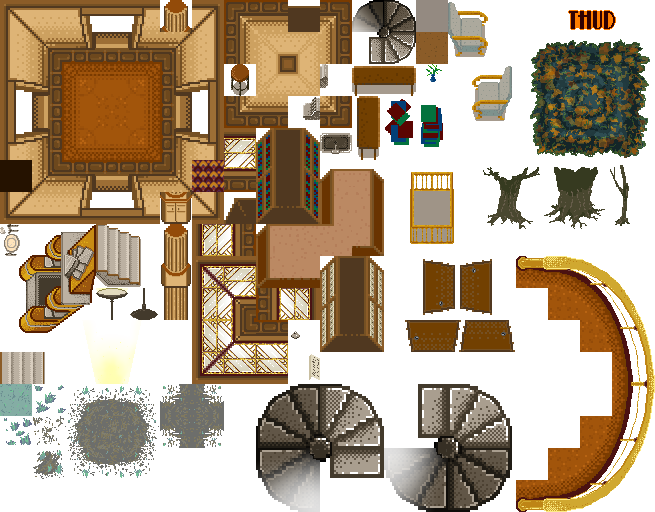 The cut scenes are comprised of .PNG files layered over one another and panned/zoomed, roughly in the same way as traditional animation. 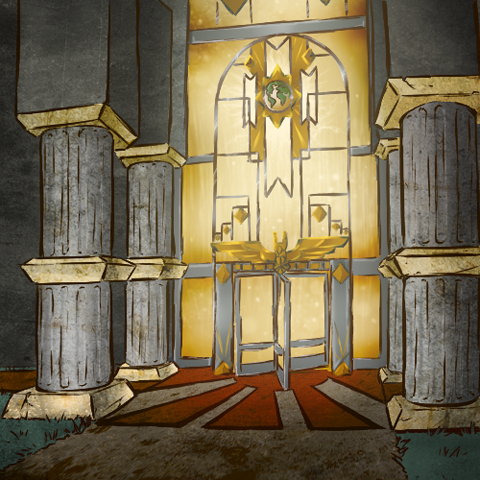 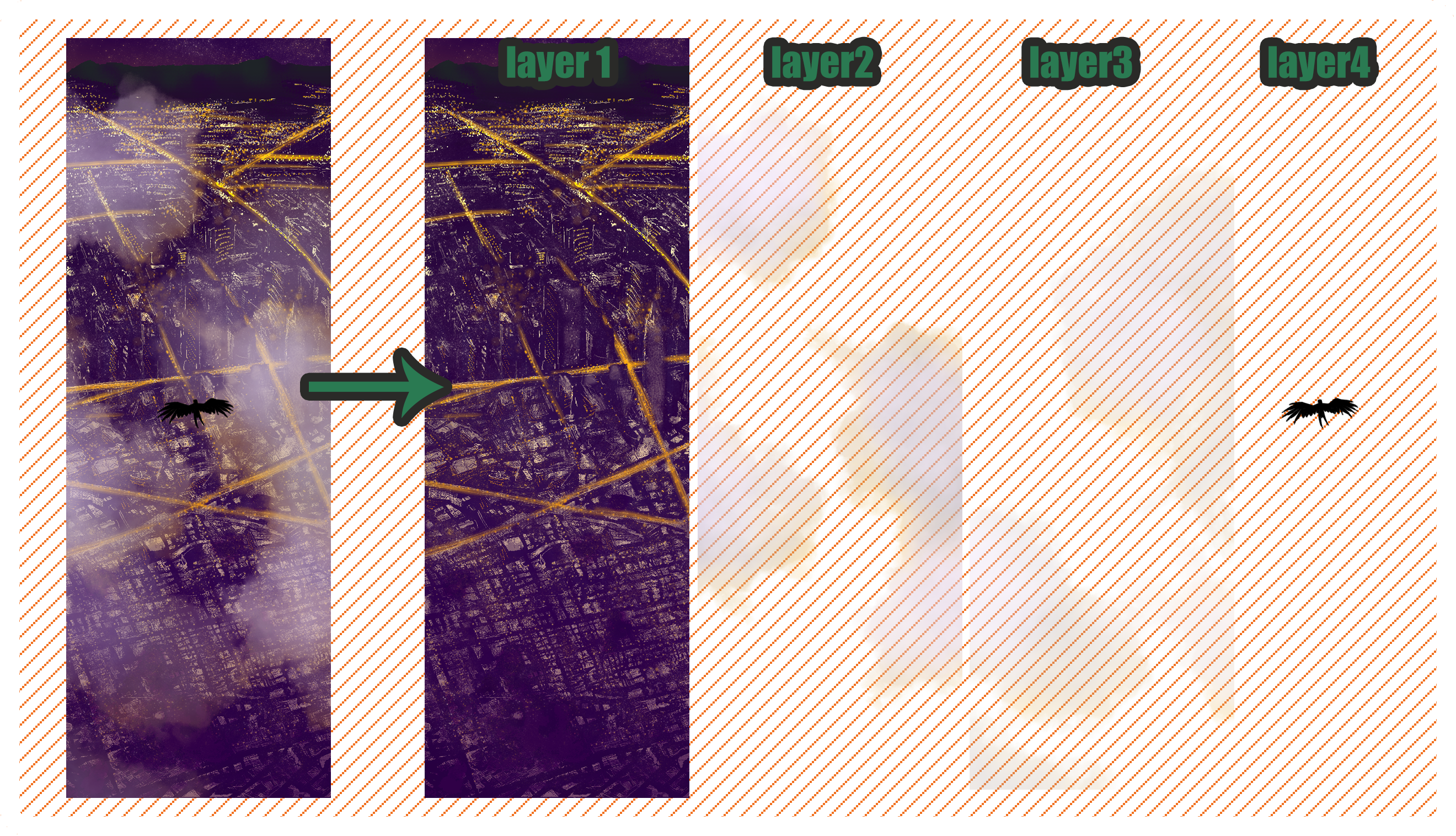 The areas played in-game are the very same ones seen in the comic pages leading up to it, and to ensure consistency I drafted up numerous quick references for layouts of important rooms for each features space as they came into the story, such as this one: 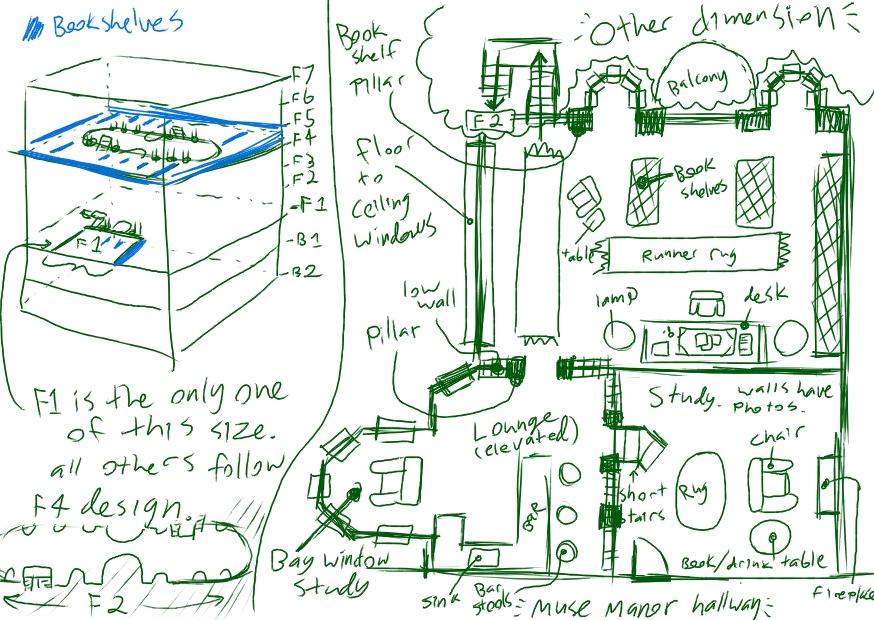 And with the multi-floor level, there is a lookout on an upper floor which lets you view the floor below with a parallax effect for a vertical perspective.

End of Infinity has been on hiatus for a number of years now. The project started development in March 2010, with content being posted from September 2011 through May 2014. The game portion took one month to produce. The 2011 launch occurred during my first semester of college and throughout the entire development timeline I had been also working a full-time job while attempting to break into the video game industry. In addition I ended up moving a total of 10 times (some of which spanning great distances, namely: Illinois, Utah, Texas, Illinois again, then Argentina), so keeping up with the project was a constant, yet somehow therapeutic, challenge.

It’s been said that this project was ahead of its time. It began years before secure WordPress alternatives like Hugo were available, open source game engines were few-to-none, and crowdfunding like Patreon was nonexistent, so funding the project and making it user-friendly while remaining secure was an uphill battle.

There also had been technical issues regarding the loss of source code during a home invasion while I was living in Argentina with Jose. His laptop was stolen, and in an unrelated random chance the hard drive of mine had been destroyed. This, coupled with the onset of issues regarding adult content being produced by some members of the public, lead me to put the MMIC iteration of EOI on hold for an indeterminate amount of time.

That said, I do intend to make use of EOI for a traditional standalone game and will begin work with some of my colleagues starting October 2019.